What’s the most exciting thing that’s ever happened to you at the airport? I’ll go first. Once, I was standing in line at the ticket counter and a Yorkie-Poo with dyed-pink hair popped out of the purse of the woman who was ahead of me in line. It was as amazing as it sounds, but that’s just about the high bar.

That is, until the surreal morning when United Airlines turned a flight from Los Angeles to Houston into a high-energy game show giveaway, part of a summer-long plan to give away 20 million miles and over $400,000 dollars to unwitting passengers.

The morning starts a little low-energy. It says a lot about the special boredom of pre-flight purgatory that even though LAX gate 72A is covered in blue and white balloons and men are constructing some sort of carnival attraction in the corner, no one seems to be taking any notice. For the most part, passengers arrive, settle into their chairs, pop their headphones in, or crack open a book.

United Airlines’ Vice President of Loyalty, Luc Bondar and I are making small talk about the Minnesota State Fair. According to Bondar, it’s pretty amazing. It’s the kind of conversation you have when you can’t, at least in front of the other passengers, talk about why you’re really here. The e-mail I received about the event was titled, simply, United Airlines Rewarded Flight Surprise. I was invited (only if I promised not to tell anyone anything about it ahead of time) to come down and be a fly on the wall to observe what happens when you surprise passengers at an airport with a ton of free stuff.

So far, what happens is not a lot. Even as they finish construction of the giant prize wheel, turn on the flashing lights, and cameramen start to pile up, the passengers still have no idea that any of this is for them, that a man with a microphone is about to say, “Welcome to the Rewarded Gate. Are you ready to get rewarded?”

Everyone with a boarding pass is invited to come on down, spin the prize wheel, and win “premium dining cards” for amounts between $10 and $200. 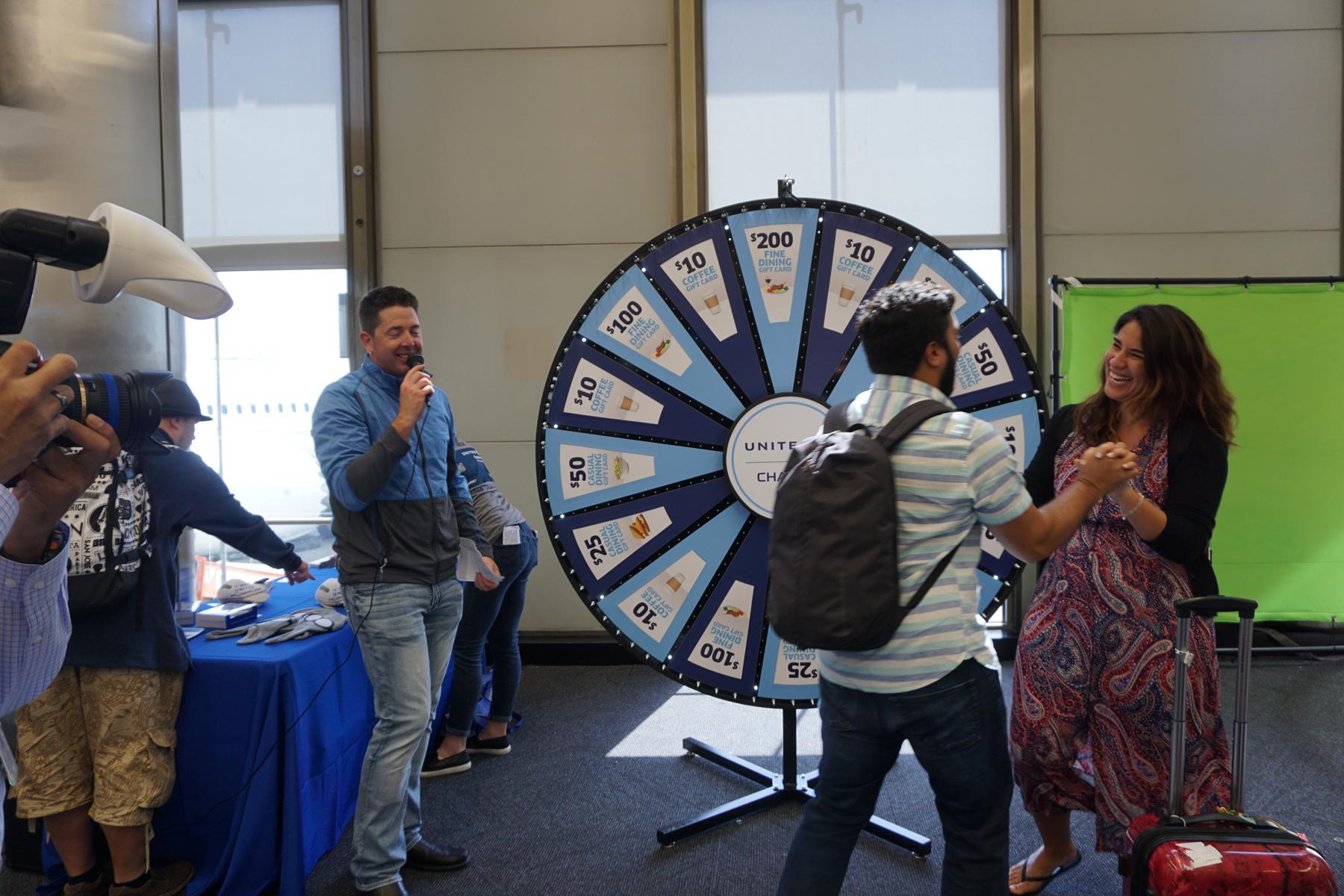 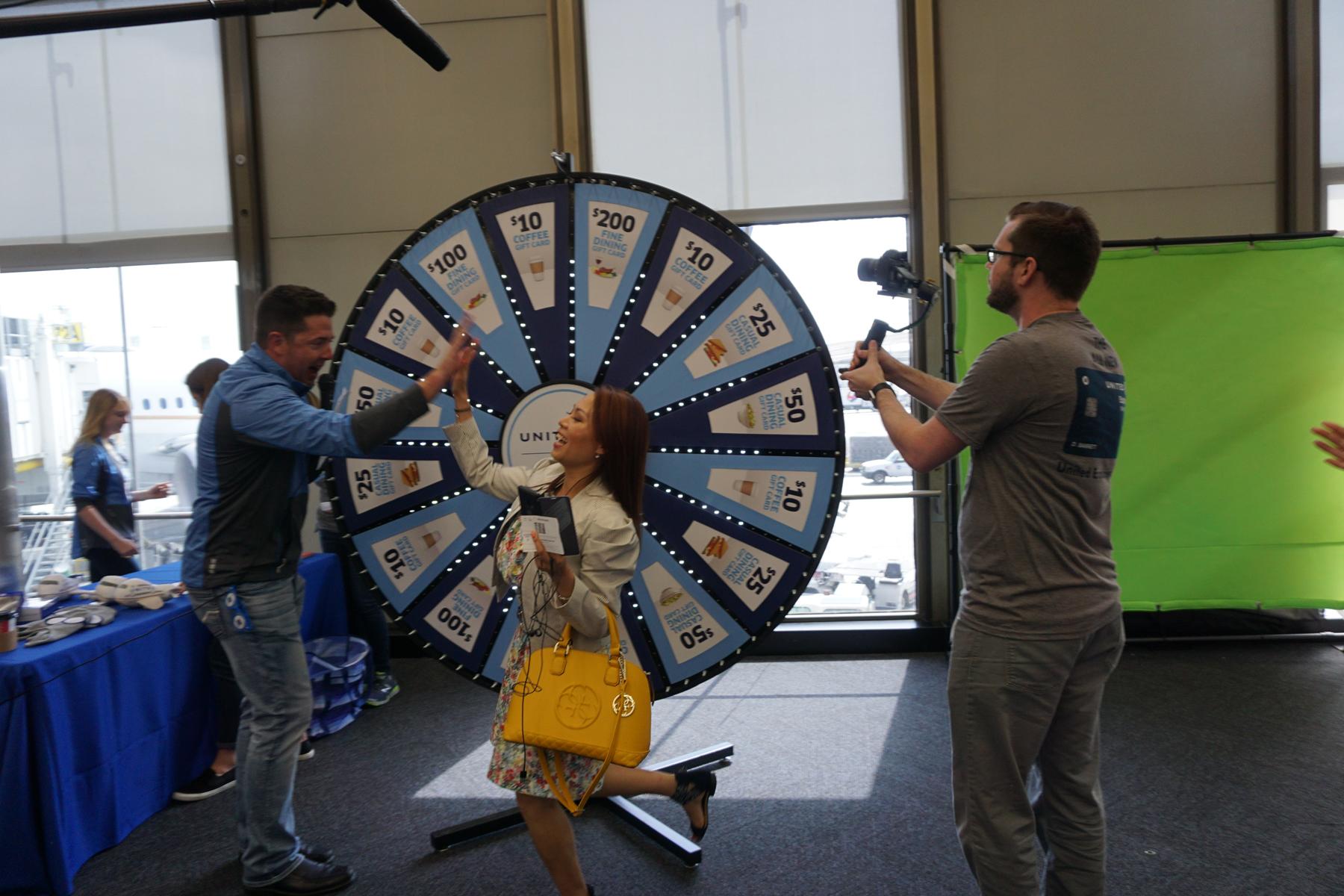 Tommy Gimler is our emcee from the evening. He’s been United Airlines’ in-house stand-up comic for a decade, and he’s the hype man this event needs. As more and more people come to line up, he makes small talk with everyone, gives people nicknames like “Michael the Chase Card Holder” and operates as their own personal cheering section.

It’s like watching a crowd warm-up comic before a taping of Rachael Ray. The jokes are broad with a little cheese—we are, after all, here for a promotion for the new United MileagePlus Card’s new perks, including two miles for every dollar that you spend at hotels and restaurants. So, spin that wheel, baby!

The very first passenger wins a $100 gift card and we clap enthusiastically. The first woman to win a $200 gift card does a little dance to a cheering crowd. Soon, people are jumping up and down with the big wins and chanting “big money” like we’re game show fanatics at The United Airlines Gift Card Giveaway.

Chase United Cardholders are showing off their cards, and when a couple on their honeymoon wins $300 dollars, the United Airlines PR team gets so excited that they upgrade them to first class.

And that’s just the first round of surprises.

On board the plane, the general aura is “good mood.” Not only is there a high concentration of prize winners, but everyone has boarded to find free phone chargers in their seats. Even the in-flight safety video takes place during Brazil’s Carnival. When the flight attendant takes my drink order at 10:30 am, she reminds me that it’s 5:30 pm somewhere and returns with a VERY strong mimosa. 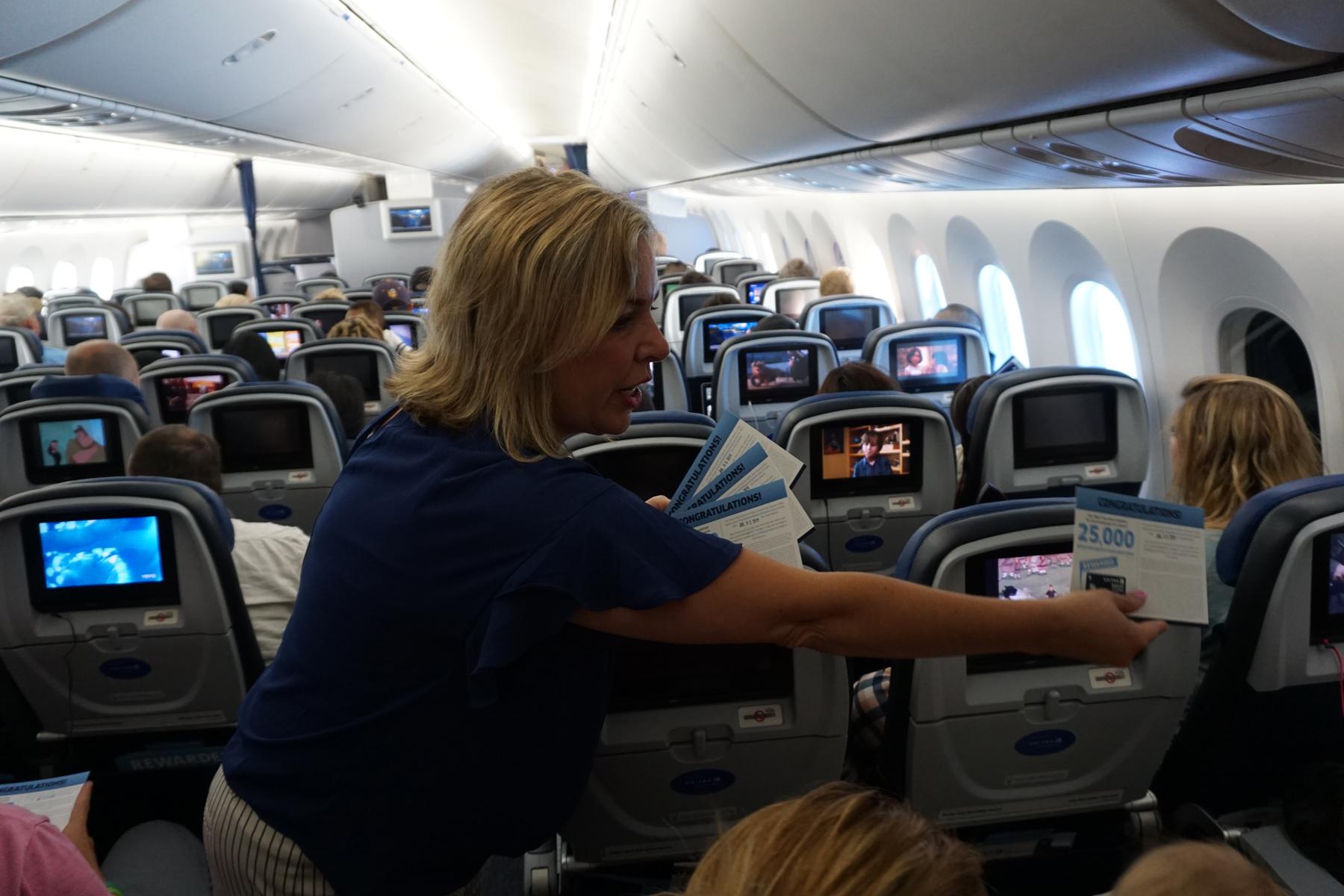 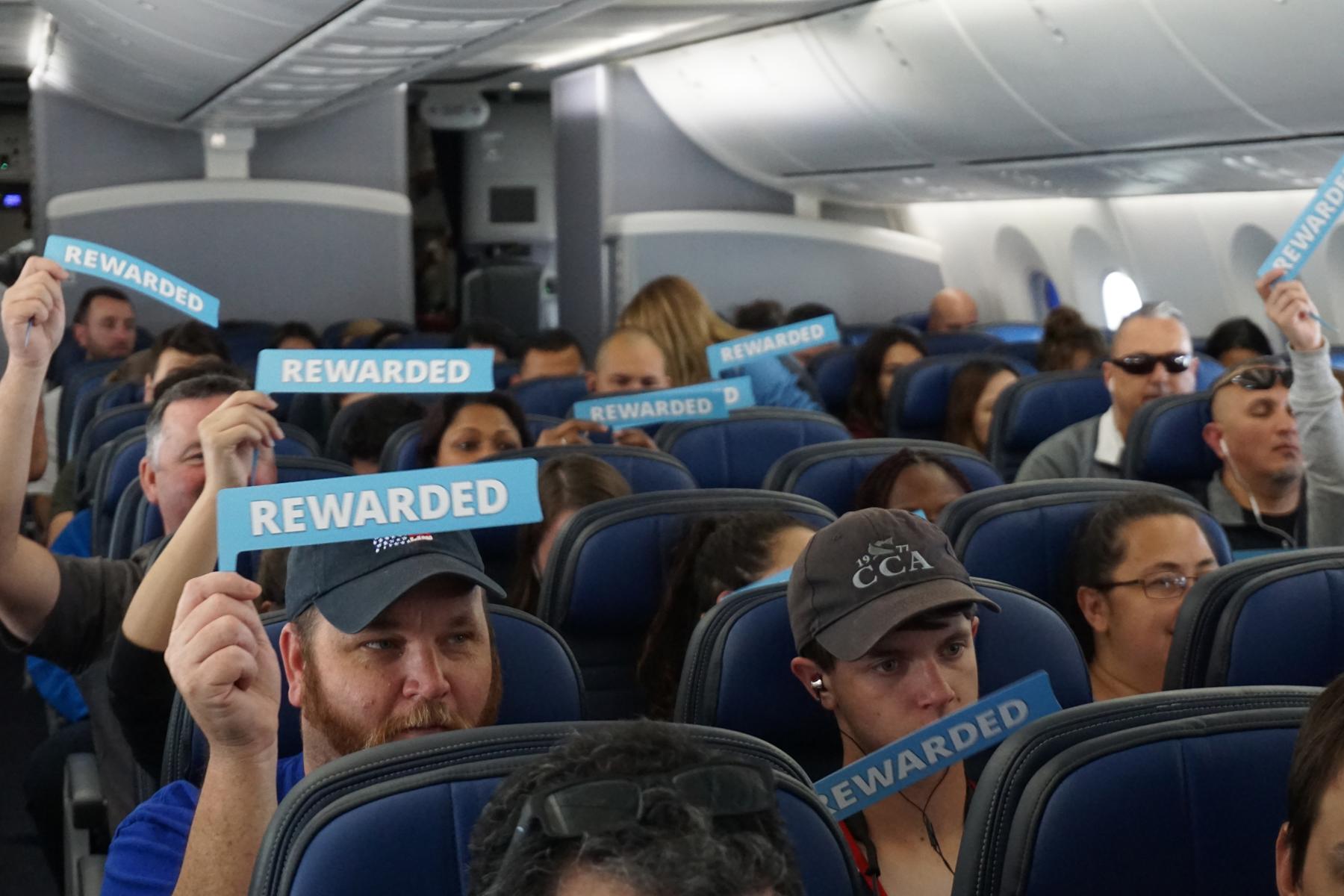 And, as soon as the fasten seatbelt sign is off, Luc Bondar, VP of Loyalty gets on the intercom to tell us all about the biggest surprise of the morning: everyone is getting 25,000 miles, enough for a round-trip flight, for free.

I could, for example, based on this miles calculator, take a round-trip flight to Minnesota (just about 25,000 miles round-trip) to see the state fair, or follow the in-flight safety video’s example and head to Brazil for Carnival (it’s 30,000 miles one-way).

But, reporters don’t get miles, and anyway, everyone else has much more adorable ideas for their miles than I do. When I ask the family behind me —Kwan and her daughter Rachael —what they’ll use their combined 50,000 miles for, Rachael shouts “Paris!” They have an annual mother-daughter trip and the extra miles will help them go abroad next year with plenty of extra money to spend on baguettes.

Another adorable kid says she’s going to Texas because it’s the only place to find fossils, a college football star is using them to go home for the holidays, and it’s all so cute that it’s no wonder United is planning to do this giveaway twice more this summer, until 20 million miles and over $400,000 in giveaways are handed out.

The time and place for the next Rewarded Gate, however, is still a secret. But if you’re flying United this summer, you never know. And if you’re not, you can still win a free vacation if you have a good story to tell, and that’s not too bad.

The Latest: Should You Change Your Travel Plans Due to the Coronavirus?

Send To A Friend

Please don't close or refresh the page while we are processing your submission
Please be patient, this could take a few minutes.